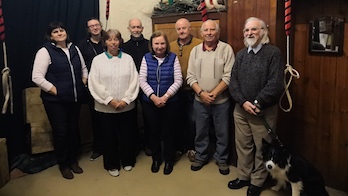 A half day workshop aimed at ringers who can already ring touches of Bob Doubles inside confidently and want to learn how to call touches. The workshop combines both theory and practical sessions.

The workshop delves into:

What do people say about ART Workshops?

Very useful – had I known about the course before installing a simulator it would have solved many problems before they were encountered!

This day was so good for everyone from real beginners right up to experienced ringers.

The day would clearly be of use to any new or novice steeplekeeper but, more broadly, would be of interest to anyone wanting to know a bit more about the mechanics of how bells are set up for ringing. If that sounds like you then I'd recommend it unreservedly.

Discussions covered all aspects, from stakeholder management and team leadership, to good practice and performance. It also allowed delegates to share experiences and ideas that had worked for them. A thoroughly enjoyable day!

I found the theory groundwork very helpful. It allowed me to start to appreciate and understand what is involved when you: call another ringer unaffected; when bobs are actually called and the ‘In/Out/Make’ formula variations.

It became clear that a conductor need not possess mystical powers – they just need to know what to look for and how to apply it.